Thanos Papakostas, MD, shares his 3D video with RetinaLink this week. Dr. Papakostas is an Assistant Professor of Ophthalmology at Weill Cornell Medicine in New York, NY. His patient is a 33-year-old Type I diabetic male with severe PDR and Tractional Retinal Detachment in his left eye. There was severe ischemia and a large neovascular frond posteriorly. 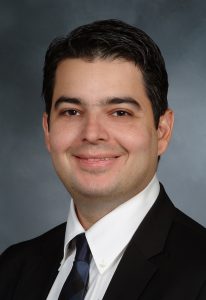 INTRAOPERATIVE:
Proceeded with 25-gauge PPV. After relieving the AP traction 360 degrees, our attention was drawn to the extensive fibrovascular proliferation posteriorly. The injection of Avastin injection helped significantly as most of the vessels had regressed. We could safely proceed to segmentation and delamination with minimal bleeding. The segmentation started in an outside inside fashion as there was an easily accessible plane temporal to the nerve. The design of the beveled cutter allowed us to use it both as a blunt dissector and vertical scissors. The 25-gauge beveled cutter provides 50% closer proximity to the retina when held at a 60-degree tangential angle compared to the flat tip cutter. In addition the distance between the tip of the cutter to the port opening, is 0.009 inches in the beveled 25-gauge tip vs. 0.0017 in the regular tip.

Furthermore, the high cutting speed allowed minimized movement of the detached retina and allowed safe and efficient removal of all the fibrovascular membranes and posterior hyaloid. No second instrument was required.

Also, the absence of rhegmatogenous component in this case made cutter delamination feasible since there was enough inherenent counter traction.

ALCON’s NGENUITY® 3D Visualization system provided a high degree of stereopsis during the fine maneuvers near the posterior pole. After all the membranes were removed, no iatrogenic breaks were made and triamcinolone was injected into the vitreous cavity and any residual hyaloid was removed.

Laser was applied in PRP fashion – 360 degrees to the ora serrata with a curved endolaser lighted probe. FAX was performed and air was exchanged for diluted mixture of 18% SF6.

RetinaLink (RL): What is most advantageous feature in your hands with the 25-gauge high-speed beveled cutter?
TP: The ability to use it as a multi-purpose instrument. It can be used as vertical scissors, pik, blunt dissector, forceps and cutter. The beveled design allows me to go safely in tight spaces and perform segmentation and delamination maneuvers safely with essentially no movement of the underlying retina.

RL: Outline the learning curve with NGENUITY, 3D, Digitally Assisted Visualization System.
TP: It takes around 5-10 cases to get used to operating with the 3D system. Ideally, you want to start with some low complexity cases like a vitreous hemorrhage or an epiretinal membrane and then advance to the most complex ones. I find NGENUITY to be most useful for the very complex PVR or TRD cases, as the visualization you get during fine peeling maneuvers is phenomenal.

RL: What is your advice for second year fellows?
TP: Read constantly, be on top of the literature and know disease pathophysiology. Two, see as many patients as you can and record and review all your surgical cases. Three, know in every detail how the vitrectomy machine works and understand fluidics. As a final note, learn how to do scleral buckles. They can be very useful in trauma, PVR and young patients.

Dr. Thanos Papakostas can be reached via e-mail – thp9034@med.cornell.edu